The City of Detroit’s garbage incinerator - the largest trash incinerator in the world - has long been a scourge of local residents and environmental justice groups. It burns nearly 800,000 tons of trash per year, emitting hazardous air pollutants including mercury, lead, and dioxins. Asthma hospitalization rates in Detroit are over three times the average rate of the state of Michigan. In part due to the incinerator, Detroit is the only city of the... Read more →

Today is the last day of our semester at Wayne Law, so it’s now official – I commuted to Detroit from Ann Arbor for the entire semester without driving a car. No small feat, as we haven’t had a reliable transit system connecting Ann Arbor to Detroit since 1983. That was part of my motivation – I wanted see first-hand what the obstacles are to putting in place a modern, efficient, reliable regional transit system... Read more →

High-Speed Rail for Michigan: We don’t know what we’ve been missing 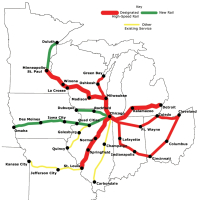 The following guest post is by Kevin Brubaker, Deputy Director of the Environmental Law & Policy Center in Chicago. Kevin manages the Midwest High-Speed Rail Network Project for the Environmental Law & Policy Center. Their 15 years of advocacy on this important and visionary project are finally paying off, as the Midwest is poised to get help from the federal stimulus program to make high-speed rail in the region a reality. Linking Detroit and other... Read more →

in Detroit, Transportation and Transit | Permalink

The Great Lakes Environmental Law Center has a new home in TechTown, the Wayne State University Research and Technology Park. TechTown is an exciting hub of social and business entrepreneurs in the historic New Amsterdam district of Detroit. TechTown was incorporated in 2000 and opened for business in 2004. The flagship TechOne building has a rich history. It was designed by renowned industrial architect Albert Kahn and features Kahn’s signature skylights – an innovation at... Read more →

Note: this post is the first in a new subject for Great Lakes Law – Detroit. Of course my adopted city has its share of challenges, but they’re neither as severe nor as unique as the national media suggests. Detroit is on the frontline of a very difficult transformation within the Midwest and urban America from the twentieth century to the twenty-first. Detroit leaders and citizens are beginning to embrace the vague concepts of “green”... Read more →