The Death and Life of the Great Lakes

The Death and Life of the Great Lakes is the boldly titled new book from Dan Egan, science reporter extraordinaire at the Milwaukee Journal Sentinel. Egan’s focus is squarely on invasive species and it shapes the book’s outlook on the health and future of the Great Lakes. He could have retold the story of clear-cutting and overfishing, industrial pollution and rivers on fire, which thanks to public outcry and the environmental laws of 1970s, is now a mere history lesson. This popular story ends on the bright note of Great Lakes restoration, cleaning up the mistakes of the past and leaving urban waterfronts of prosperity and pleasure. Egan covers and then dismisses this story in his introduction: “It all gives the impression that humans and the lakes have finally leaned to get along. It’s a mirage.” 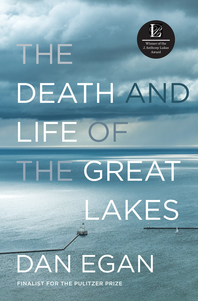 Instead, Egan tells the story of invasive species in the Great Lakes going back two centuries, and with no happy ending in sight. It begins with the sea lamprey and zebra mussels that came in the “front door” – which is how Egan describes the St. Lawrence Seaway and its ocean-going vessels that opened the Great Lakes to the Atlantic Ocean. The invasion story continues with the Asian carp threatening to come through the “back door” – the Chicago canals that artificially connect the Great Lakes with the Mississippi River system. Egan looks back on the public works and civil engineering feats that connected the Great Lakes with the Atlantic Ocean and the Mississippi River not with nostalgia, but with a scientist’s lament, as he documents the effects of invasive species across the system.

Not all non-native species came by accident, and some aren’t considered “invasive.” Rather, some are prized as sport fish and called a Great Lakes success. Egan dives right into this dichotomy with the history of the popular Coho and Chinook salmon. The legendary Dr. Howard Tanner of the Michigan Department of Natural Resources introduced these Pacific Ocean species to create a sport fishery in the Great Lakes, regardless of native communities. As Egan writes, “Howard Tanner was never big on the idea of valuing native species simply because they are native. His priority in the 1960s was to convert the lakes from a resource primarily managed as a commercial fishery into a sportsmen’s haven, and native species just didn’t fit his bill—and they still don’t. ”

The contrasting reception of Asian carp and Pacific salmon by Great Lakes residents shows that views on non-native species are as much about human values as biological integrity. The Death and Life of the Great Lakes is similarly about our values. Are the Great Lakes an economic engine, to be put to work for the region’s benefit? Or do we want something more – yet simpler – from the world’s largest freshwater resource? Egan hints at his views throughout the book, but makes it clear in the end when he shares the story of his son’s first Lake Michigan fishing catch. It’s a cliché to say these moments are priceless, but as public debates swirl over funding and regulations, Egan reminds us what’s really at stake.

Update: Detroit’s Metro Times excerpted Dan Egan’s The Death and Life of the Great Lakes for its cover story - “How Asian carp could soon take over the Great Lakes — and how they could be stopped.”