« Border Flows: A Century of the Canadian-American Water Relationship | Main | The Flint Water Crisis: Systemic Racism Through the Lens of Flint – Report of the Michigan Civil Rights Commission » 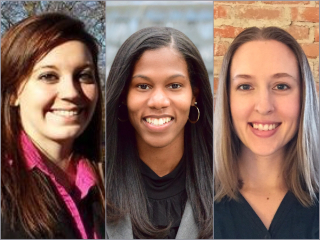 Sabra Bushey, Wayne Law ’17, returns for a second year as a fellow. She is also a second-year member of the school’s National Environmental Law Moot Court Competition team and the Board of the Environmental Law Society. She graduated from the University of Maryland, College Park with a B.S. in Environmental Science and Policy and a double minor in Sustainability and Environmental Economics. Her honors thesis analyzed the implications of water privatization. She has worked with the U.S. EPA’s Office of Enforcement and Compliance Assurance, NOAA’s Chesapeake Bay Office, the U.S. Department of Energy’s Office of General Counsel, Office of NEPA Policy and Compliance, and most recently the Michigan Attorney General’s Office of Special Counsel for the Flint Water Crisis.

Jasmin M. Haynes, Wayne Law ’18, is President of the Black Law Student Association and a Damon J. Keith Legacy Scholar. She earned her M.S.W. from the University of Connecticut and B.S. from Michigan State University in Urban and Regional Planning. She is currently the Charity Hicks Human Rights Fellow at Edwards & Jennings, P.C., and continues to serve as Managing Chief Executive for Builders of Promise, a neighborhood revitalization and youth mentoring organization she founded that creates community gardens on Detroit’s westside. A graduate of Detroit’s Cass Tech High School, she did social work to help create non-violent and drug-free communities before coming to law school.

Erin Mette, Wayne Law ’18, is a member of the Wayne Law Review, the National Environmental Law Moot Court Team, and the Board of the Environmental Law Society. She earned her M.S. from the University of Michigan’s School of Natural Resources and Environment with a concentration in Environmental Behavior, Education, and Communication and her B.A. from Kalamazoo College in Political Science with concentrations in Environmental Studies, Public Policy and Urban Affairs. While in law school, she interned with Chief Justice Robert P. Young, Jr. of the Michigan Supreme Court. She previously worked in environmental education, including positions with the Michigan Department of Natural Resources, The Greening of Detroit, and the Leslie Science and Nature Center.

Joe Regalia returns as a postgraduate Research Fellow, now clerking for Judge Jay Bybee of the U.S. Court of Appeals for the Ninth Circuit. He graduated summa cum laude from the University of Michigan Law School in 2013 earning the Daniel Grady Award for finishing 1st in his class. While in law school, he served as an editor with the Michigan Journal of International Law and the Michigan Journal of Environmental and Administrative Law. He then clerked for Judge Andrew P. Gordon of the U.S. District Court for the District of Nevada. His publications include “Interstate Groundwater Law Revisited: Mississippi v. Tennessee,” 34 Virginia Environmental Law Journal 152 (2016) and “The Common Law Right to Information,” 18 Richmond Journal of Law & the Public Interest 89 (2015).