An American Reset - Safe Water & a Workable Model of Federalism

The following guest post is by Professor Cara Cunningham Warren of the University of Detroit Mercy School of Law. Professor Warren’s background includes both domestic litigation and U.S.-Canadian law, and she is currently an LL.M. candidate at the University of Toronto Faculty of Law. Her recent article, An American Reset—Safe Water & a Workable Model of Federalism is forthcoming in the Duke Environmental Law & Policy Forum. In the article, Professor Warren explains the Flint water crisis as a failure of federalism, with the various levels of government failing the public and blaming each other. Instead, she suggests a new collaborative federalism model where federal, state, and local water suppliers are jointly responsible for the safety of our drinking water, as explained below.

The facts of the Flint water crisis become better known each day. When you consider them, what word comes to mind? I would hazard a guess that few people answered “federalism” (or, more specifically, the cooperative federalism model we rely on for safe water). Yet a structural flaw in our system is at the root of the crisis and is preventing meaningful resolution, such that the question is not if but when Flint Water will repeat itself elsewhere. (Indeed, a recent NRDC report reveals that in 2015, 3.9 million Americans were exposed to water with unacceptably high lead levels, and 18 million more were at risk. In more than 80% of these cases, no formal enforcement action was taken.)

The connection between Flint water and federalism is brought to light by the testimony Governor Snyder and EPA Administrator McCarthy offered to the House Oversight Committee in March 2016. Each one pointed a finger at the other, and there was a kernel of truth to what each one said. This is the underlying and pernicious problem. The Safe Drinking Water Act model resembles an inverted pyramid, where responsibility devolves from the federal to the state government and then from the state to the local water suppliers. 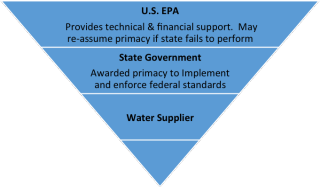 This layered approach works so long as the locality is capable of performing. When it is not, it has no power to assert upward through the pyramid, which impairs its ability to obtain necessary assistance. In this situation, as we saw in the March 2016 testimony, the locality and its citizens are at the mercy of state and federal officials as they debate who should get involved, when, in what capacity, and to what extent.

Instances of delayed intervention or confusion between state and federal officials might be reduced if the EPA Inspector General’s October 2016 recommendations are implemented, in the sense that they seek to clarify when the EPA should issue emergency administrative orders. However, these changes would not address the reality facing local water suppliers. Recall that the EPA issued its Flint emergency administrative order in January 2016. As of June 2016, EPA was still expressing its concern that Flint lacked the technical, managerial, and financial capacity to provide safe water. No wonder. Flint was struggling to meet its responsibilities. Had the guidance suggested by the Inspector General been in place in 2015, EPA may have issued its administrative order earlier; however, the order and even intense public scrutiny could not change the on-the-ground reality. Until Flint’s capacity changed, the result would remain the same.

What’s more, we can expect other localities to be in Flint’s situation. In light of crumbling infrastructure, increasing water demands, climate change, and security concerns, the challenges facing these small and increasingly local suppliers will outpace their capacity.

The article, An American Reset, encourages a conversation and suggests that suppliers need a stronger mechanism to bring state and federal resources to bear. One way to do this is to shift to a collaborative federalism model where federal, state, and local water suppliers are jointly responsible for the safety of our drinking water. Each actor could be assigned specific responsibilities that are aligned with its strengths, but joint responsibility brings all actors to the table and holds them all accountable.

Americans took bold action at the time of our founding and created the modern concept of federalism, which was revolutionary at that time. In the 1970’s, Americans ushered in the “decade of the environment” and devised a new approach to safe drinking water. The time has come for another American reset—one that considers the demands of 21st century water delivery, gives localities a much-needed voice, and holds more powerful state and federal officials accountable.