In the early spring of 2012, a black pile three stories high and as large as many of the surrounding buildings appeared along the shores of the Detroit River. This pile was made up of petroleum coke, or “petcoke,” a byproduct created by the process of transforming heavy tar sands oil into useable fuel. While petcoke is not traditionally burned in the United States, competitive markets exist for petcoke in the developing world. This pile’s presence along the Detroit River stemmed directly from the recent construction of a tar sands processing facility at Marathon’s Detroit refinery and Detroit’s status as an important North American transportation and shipping hub. However, as black clouds formed and thick, black dust began to coat surrounding buildings, Detroit residents began asking where this uncontained pile of petcoke came from, who put it there, and whether its presence was lawful.

This is the introduction of Erica Shell’s recent article, Petcoke: How an Outdated and Inconsistent Regulatory Framework Defeats Environmental Justice in Detroit, 33 Michigan Environmental Law Journal 32 (Summer 2015) (available free online). Erica graduated from Wayne Law earlier this year and has started her litigation practice at the Bodman law firm in Detroit. Her article provides detailed answers to the questions of how and why petcoke piles came to the banks of the Detroit River. It’s a warning tale of what happens when global demand for cheap dirty energy is supplied through tar sands oil refined in Detroit.

The article details the applicable laws and regulatory regime in the context of Detroit’s historic and ongoing environmental injustices. Our environmental laws simply don’t do enough to protect our health and our water, especially in poor vulnerable communities. From the conclusion:

Siting industrial and noxious uses in close proximity to Detroit’s low-income and minority communities recalls an unfortunate tradition of environmental racism dating back to land-use decisions made over two hundred years. Detroit’s experience with bulk storage of petcoke in close proximity to residential areas exposed a number of zoning and regulatory inadequacies that deprived many residents of a clean, healthful, and enjoyable neighborhood, and which will continue to do so if those inadequate policies are not carefully amended and revised. Ongoing reliance on fossil fuels, especially those—like heavy tar sands oil—that require intensive processing, to meet our national energy needs is in conflict with a sustainable energy policy over the long term, and threatens global climate stability. Moreover, without a more organized regulatory approach at the local level for the shipment, processing, storage, and treatment of heavy tar sands oil and its byproducts, the negative impacts felt most heavily by the communities surrounding these activities will both multiply and magnify if national reliance on heavy crude imports increases. 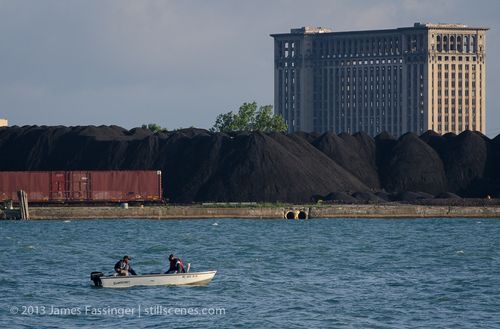 This image is from an excellent photo essay by James Fassinger, The Human Cost of Detroit’s Petroleum Koch Piles, Stillscenes (2013) (cited in the article).