The Law of Adaptation to Climate Change: United States and International Aspects 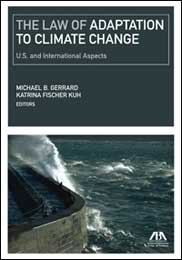 The American Bar Association has just published The Law of Adaptation to Climate Change: United States and International Aspects. This massive volume (just under 900 pages), edited by Michael B. Gerrard and Katrina Fischer Kuh, has twenty-five chapters covering the landscape of legal issues regarding climate change adaptation. Here’s the publisher’s description:

The laws that attempt to reduce climate change are well known. But what about laws to deal with the climate change that will occur regardless of these efforts? The Law of Adaptation to Climate Change takes a sweeping look at the current and proposed legal aspects of coping with climate change – from drought, extreme precipitation, heat waves, and wild fires to global shifts in temperature, sea level, water and food supply, coastal conditions, infrastructure, ecosystems, and human health and economies. Applicable laws exist at all levels (international, national, state, local) and in different forms (constitutions, statutes, agency regulations, judicial decisions, private agreements, voluntary guidelines); they are not only uncoordinated but collectively embody numerous contradictions and inevitable gaps.

This state-of-the-art compendium examines how laws are being modified, finessed, or imagined to deal with the impacts of climate change, both in the United States and around the globe. Chapter authors have significant experience in the legal aspects of climate change and are drawn from private practice, government, and academia. When it is not known how the law will, or even should, respond, these authorities suggest informed possibilities for future action.

Ben Houston (a former student from the University of Michigan Law School) and I co-authored the chapter on “Managing Demand for Water.” Here’s the full list of chapters (a detailed summary of contents is also available online):