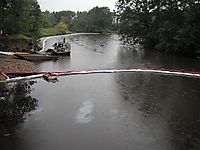 “On Sunday, July 25, 2010, at 5:58 p.m., eastern daylight time, a segment of a 30-inch-diameter pipeline (Line 6B), owned and operated by Enbridge Incorporated (Enbridge) ruptured in a wetland in Marshall, Michigan. The rupture occurred during the last stages of a planned shutdown and was not discovered or addressed for over 17 hours. During the time lapse, Enbridge twice pumped additional oil (81 percent of the total release) into Line 6B during two startups;... Read more →

The Great Lakes Protection Act was recently introduced in Ontario (Bill 100, 1st Sess., 40th Leg.). The Act, administered by the Minister of the Environment, would help to identify areas of concern that may adversely affect the ecological health of the Great Lakes-St. Lawrence River Basin, and establish and prioritize objectives. In that regard, the Act focuses on incorporating public involvement and collaboration with the Government of Ontario. These cooperative efforts would be accomplished primarily... Read more →