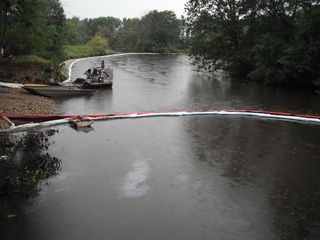 “On Sunday, July 25, 2010, at 5:58 p.m., eastern daylight time, a segment of a 30-inch-diameter pipeline (Line 6B), owned and operated by Enbridge Incorporated (Enbridge) ruptured in a wetland in Marshall, Michigan. The rupture occurred during the last stages of a planned shutdown and was not discovered or addressed for over 17 hours. During the time lapse, Enbridge twice pumped additional oil (81 percent of the total release) into Line 6B during two startups; the total release was estimated to be 843,444 gallons of crude oil. The oil saturated the surrounding wetlands and flowed into the Talmadge Creek and the Kalamazoo River. Local residents self-evacuated from their houses, and the environment was negatively affected. Cleanup efforts continue as of the adoption date of this report, with continuing costs exceeding $767 million. About 320 people reported symptoms consistent with crude oil exposure. No fatalities were reported.” --- Executive Summary of the National Transportation Safety Board's report on the Enbridge oil pipeline spill.

It’s been nearly two years since Enbridge’s pipeline spill in Marshall, Michigan dumped almost a million gallons of crude oil into Talmadge Creek and the Kalamazoo River. When I visited the site about a week after the spill, residents wanted to know how it happened and what went wrong. We now know the answers, and it seems that the spill could probably have been prevented, and certainly minimized, if Enbridge had done its job right. The National Transportation Safety Board's report on the Enbridge oil pipeline spill and the section on “Probable Cause” says it all:

"The National Transportation Safety Board (NTSB) determines that the probable cause of the pipeline rupture was corrosion fatigue cracks that grew and coalesced from crack and corrosion defects under disbonded polyethylene tape coating, producing a substantial crude oil release that went undetected by the control center for over 17 hours. The rupture and prolonged release were made possible by pervasive organizational failures at Enbridge Incorporated (Enbridge) that included the following:

Contributing to the severity of the environmental consequences were (1) Enbridge's failure to identify and ensure the availability of well-trained emergency responders with sufficient response resources, (2) PHMSA's lack of regulatory guidance for pipeline facility response planning, and (3) PHMSA's limited oversight of pipeline emergency preparedness that led to the approval of a deficient facility response plan."