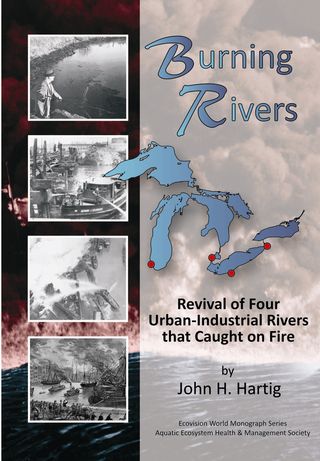 Remember when rivers catching fire symbolized environmental degradation? I don’t - I was born in 1974, and my generation saw environmental values debated through Styrofoam cups and the spotted owl (rather lame symbols in comparison to a burning river). But the stories of rivers burning became a legendary chapter in the making of environmental law and the growth of political environmentalism. Yet I never understood the complexity of the problem, and the tremendous success in restoring these rivers, until I read Dr. John Hartig’s superb book, Burning Rivers: Revival of Four Urban-Industrial Rivers that Caught on Fire.

As the title implies, Burning Rivers tells the stories four rivers in the Great Lakes basin that caught on fire because of oil pollution – most famously the Cuyahoga River in Cleveland, as well as the Buffalo River in New York, the Rouge River in southeast Michigan, and the Chicago River in Illinois. Dr. Hartig’s research goes beyond oil pollution and resulting river fires, and provides a fascinating historical lesson on the relationship between the growth of the industrial Midwest and the degradation of our urban rivers. He details how these urban rivers were critical natural and national resources that helped the United States industrialize and prosper, even playing a role in the massive effort to win the Second World War. Urban rivers paid a price for all this, and were all but dead from oil and chemical pollution by the late 1960s.

But the story does not end with dead waterways. Instead, the book details the tremendous community and political efforts to restore the rivers. Taken together, the stories of each river’s restoration paint an inspiring picture of our capacity to work together and solve environmental problems. The successes are amazing. Rivers once left for dead now teem with nesting bald eagles, trophy northern pike and other sport fish, and community parks for swimming. The ecological restoration has often come in partnership with economic progress, such as Ford’s modern Rouge Complex, which provides a model of sustainable manufacturing and water protection. Reading Burning Rivers gives me a new sense of optimism and hope that we can overcome our modern water pollution problems and finally achieve the Clean Water Act’s goal of fishable, swimmable, and drinkable water in our urban rivers.

Dr. John Hartig is the ideal person to bring the stories of urban rivers to press.  He was trained as a limnologist and has over 30 years of experience in environmental science and natural resource management. He currently serves as Refuge Manager for the Detroit River International Wildlife Refuge and previously served as River Navigator for the Greater Detroit American Heritage River Initiative and spent twelve years working for the International Joint Commission on the Canada-U.S. Great Lakes Water Quality Agreement.  Dr. Hartig has been an Adjunct Professor at Wayne State University where he taught Environmental Management and Sustainable Development, and has served as President of the International Association for Great Lakes Research.  He has authored or co-authored over 100 publications on the Great Lakes. Most recently, Burning Rivers won the 2011 Green Book Festival award for scientific writing.

Burning Rivers: Revival of Four Urban-Industrial Rivers that Caught on Fire can be purchased through the publisher Multi-Science Publishing Co., online from Michigan Sea Grant, and from Amazon. Proceeds go to the Aquatic Ecosystem Health and Management Society for dissemination of science.