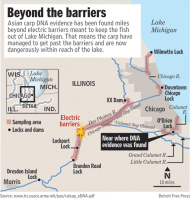 Asian carp are poised to enter the Great Lakes, and may already be within the watershed, thanks to a series of disastrous decisions and mistakes by state and federal government agencies. Scientists have collected DNA evidence showing that two distinct species of invasive Asian carp – the bighead carp and the silver carp – have made their way up the Mississippi River system and past the ineffective electric barriers operated by the Army Corps of... Read more →

A new study has provided empirical evidence of what many environmental justice advocates have long known – black Americans are far more likely to live near pollution than white Americans. The disparity occurs in most parts of the country, and in cities, suburbs, and urban areas. However, the racial injustice is most terrible in Midwestern metro areas, where black Americans are almost twice as likely to live within a mile of a major pollution source... Read more →

Since 2001, the University of Toledo College of Law has hosted an annual Great Lakes Water Conference that brings together leading academics, policy makers, and legal practitioners to explore the range of legal issues facing the Great Lakes. I make the trip down to Toledo almost every year for the conference, as it has become a reliably useful and productive forum to debate current issues and exchange cutting-edge ideas. Professor Ken Kilbert has continued to... Read more →

in Conferences and Events | Permalink