Asian carp are poised to enter the Great Lakes, and may already be within the watershed, thanks to a series of disastrous decisions and mistakes by state and federal government agencies.  Scientists have collected DNA evidence showing that two distinct species of invasive Asian carp – the bighead carp and the silver carp – have made their way up the Mississippi River system and past the ineffective electric barriers operated by the Army Corps of Engineers.  The electric barriers were supposed to keep the Asian carp from entering the shipping canal that artificially links the Mississippi River system with Lake Michigan and the Great Lakes.  But delays, operating mistakes, and lack of political will by the Army Corps to protect the Great Lakes from this devastating invasive species could mean that Great Lakes fisheries will never be the same. 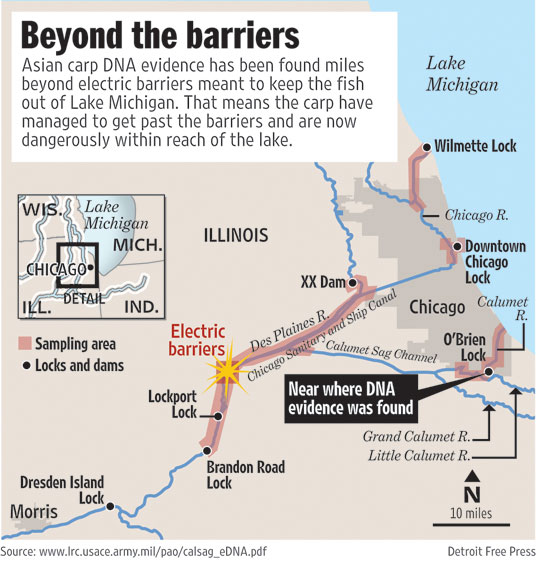 The history of this problem is a telling and angering example of how state and federal agencies – often the same agencies entrusted with environmental protection and natural resource conservation – have put the interests of a few politically connected Arkansas agribusinesses and shipping companies ahead of the millions of citizens that value a healthy Great Lakes fishery.  Over three years ago, Dan Egan of the Milwaukee Journal Sentinel wrote an extensive three part investigative story – Troubled Waters: The Asian Carp Invasion – detailing the how the U.S. Environmental Protection Agency and Arkansas Game and Fish Commission were responsible for this ecological disaster.  The entire series is worth the time to read – Part 1: Chaos uncorked, Part 2: Unwanted bounty, and Part 3: Last line of defense.  Eric Sharp of the Detroit Free Press also has a good short history of the debacle, which he summarizes as a “monumental government screwup”.

The historic mistakes of the US EPA (which thought the carp could help treat sewage) and state officials in Arkansas (looking out for their agribusiness industry) resulted in the invasive Asian carp taking over many stretches of the Mississippi River system.  The Asian carp can be huge – often over 50 pounds – and eat up to 40% of their body weight daily, ravaging the natural ecosystem.  Because the Chicago Sanitary and Ship Canal provides an artificial link between the Mississippi River system and Lake Michigan, for years conservationists have feared that the carp would make their way up the river and into the Great Lakes.  The Army Corps of Engineers was supposed to build an effective electric barrier, but the project became another disaster of delays and ineptitude, with the electric barrier never operating at the full strength required, due to opposition from the few shipping companies that use the Chicago Canal.  As a result, the Asian carp have now breached the electric barrier and are moving towards Lake Michigan.

At this point, the only hope is to close the locks and prevent any further spread of the Asian carp up the Chicago Canal.  The next step is then to close the Chicago Canal and restore the natural separation between the Mississippi River system and the Great Lakes.  Government won’t do this on its own initiative, as the relevant agencies are clearly too reactive and beholden to shipping interests to take aggressive action to protect the Great Lakes.  Unfortunately, these are the same agencies that will be getting millions of taxpayer dollars from Congress and President Obama to “restore” the Great Lakes from invasive species.  Once again, it seems the federal government would rather throw money – ineffectively – at the problem than take proactive action to prevent the problem from occurring or getting worse.  The national environmental organizations have so far been reluctant to criticize the Obama administration, but while this problem has historic roots, the current leadership of the EPA and Army Corps of Engineers should be held accountable for their recent mistakes.  Moving forward, we need to decide if the health of the Great Lakes fisheries is more important than a few shipping companies operating on an outdated canal.

Update: Additional coverage from the Washington Post by Kari Lydersen and Peter Slevin